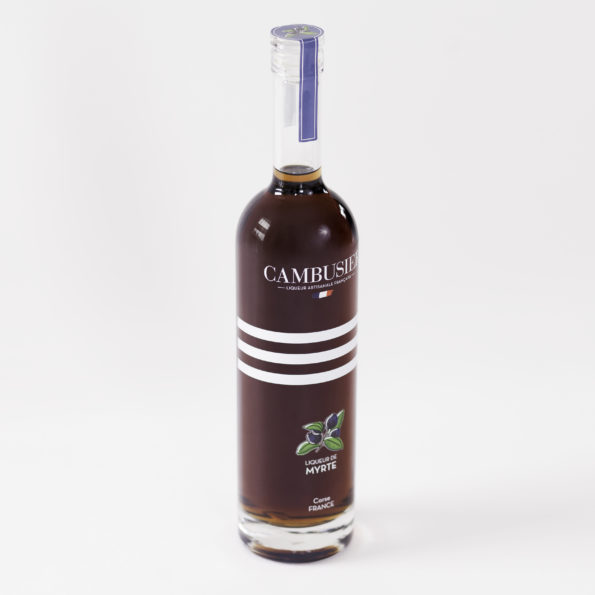 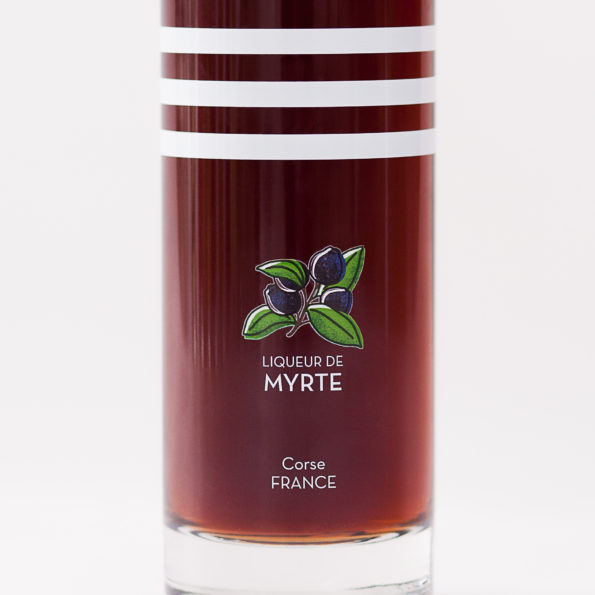 Cambusier’s copper-brown-coloured liqueur is made by macerating Cap Corse myrtles.
Indulgently fruity, complex yet original, it wows with its incomparable taste.

Presented in its branded box
Volume: 50 cl / Alcohol 24%
Made in Rogliano (Upper Corsica)

The Distillerie Casa Angeli is located at the North of Cap Corse, “Island on an island” in the Rogliano Valley. The maquis of this wild landscape, kissed by sea breezes, overflows with fruit, plants and berries used for conjuring up a myriad of sweet, fragrant delights. The area also hosts Corsica’s smallest AOC (PDO) wine-growing holding. On a plot of hardly even a hectare, the old over 40 years old vine is carefully nurtured and produces an incredibly rich Muscat du Cap Corse blessed with superb aromatic complexity.
Daniel Angeli, the winemaker, looks after this precious little area of land with great passion and where he now lives happily since the other members of the family, Antoine and Angélique decided to settle to establish the Distillerie Casa Angeli which produces a highly-diversified extensive range of spirits.
The vineyard’s boutique is an invitation to discover and taste liqueurs, eaux de vie, traditional Pastis (gold medal at the Brussels International Spirits Competition), and even a traditional “real Cap Corse” and a liqueur known as “acqua d’oru”, deliciously flavoured with Corsican lemons and citrons and in which gold flakes twist and twirl.
The Distillerie Casa Angeli an enchanting tale of authentic tastes, perpetuating yesteryear’s recipes to preserve heritage, ancestral know-how and a special, nature-oriented way of living.

Corsica which is popularly known as the Isle of Beauty is not, strictly speaking, a French region but has the status of territorial authority/community. Extending over 8,700 km², it is the Mediterranean’s 4th largest island and is divided into two parts: South Corsica and Upper Corsica. Geographically-speaking, Corsica is situated South-East of Menton, on the Côte d’Azur, West of Tuscany and North of Sardinia. It is a mountainous and richly-forested island with a Southern coastline comprised of towering cliffs. Demographically, Corsica is France’s 4th most populated island after Réunion, with 323,000 inhabitants.
This island, which is visited every year by thousands of tourists, is famous for its landscapes, its language, its traditions and its gastronomic specialities which include cold cuts, Brocciu cheese fritters and Fiadone cheesecake. Corsica also has world-renowned vineyards stretching over some 8000 hectares which give it its unrivalled craft liqueur savoir-faire, as proved by its myrtle liqueur.

Myrtle is a plant which mainly grows in Mediterranean regions and which produces berries greatly enjoyed for their taste which is much like that of juniper berries and for the plant leaves which are quite akin to rosemary. In the French language when talking about myrtle, we say “DU myrte” for the shrub which is characteristic of the Corsican maquis and “DE LA myrte” for the berry itself.
Nowadays, myrtle is mainly grown in Corsica, Sardinia and Sicily to flavour game (venison) and fatty meats but also for making liqueur which is widely-appreciated in Corsica (Morta) and in Sardinia (Murta). So, it was only natural for Cambusier to get supplies directly from the Isle of Beauty to concoct its intensely-flavoured, delectable Myrtle Liqueur.