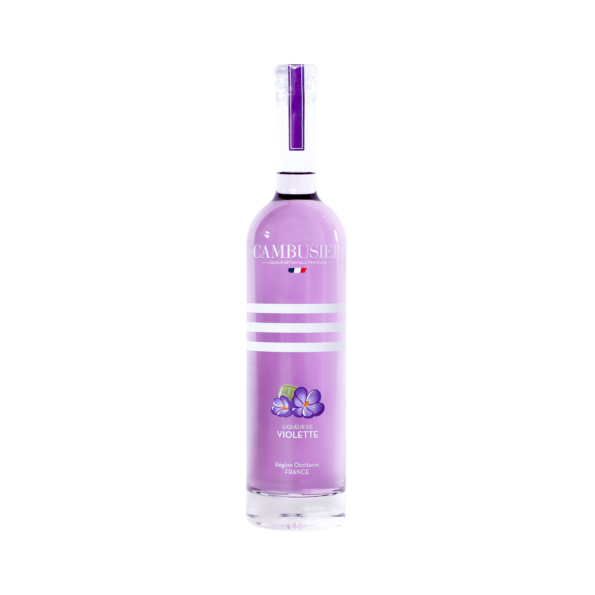 Cambusier’s violet liqueur, incredibly scented, results from a maceration of violets.
Sweet, floral and subtle, it surprises with its incomparable taste.

This liquor can be drunk pure, as a kir or in a cocktail and is served fresh.

The PHILIPPE AURIAN company was created in 1981. It has two cellars: the Aperitifs and Liqueurs cellar on the Nérac road to the Autièges lock road and the Chai rue des Carmes in Condom for the Armagnacs. As a craftsman registered in the register of trades Philippe Aurian manufactures itself Aperitifs and Liqueurs. A distiller in wines and armagnacs since 1880, the Aurian family had offered their Armagnac at the World Fair in Paris in 1900. In 1980, having finished his studies at the hotel school of Toulouse, Philippe Aurian joined the family profession. where Jean, his father still in activity, teaches him assemblies and a motto: quality rather than quantity. He decides to start his own business with his wife. Thanks to its light structure (19 people and up to 24 in season) his company has the ability to easily adapt to the needs of the market and the wishes of customers. The range of traditional liqueurs wishes to meet the expectations of the consumer wishing to enjoy the Aperitif a fruity product, fresh and if possible without more alcohol than a glass of wine. We must not compare the power of these aperitif wines to their counterparts at 17 or 18 °, alcohol being a solvent of flavors it is normal to have 17 ° more power than 11.5 °.

The new Greater Occitania region is made up of the two former metropolitan administrative regions of Languedoc Roussillon and Midi-Pyrénées, bringing together thirteen départements. Structured by two dynamic urban centers, Toulouse and Montpellier, the Occitanie region, with an area of ​​72,724 square kilometers and a population of 5.6 million, enjoys many advantages.
Occupying today about one third of France Occitan space has no political borders but cultural and especially linguistic criteria allow to establish it. In this respect, it is one of the largest ethnic minorities in Europe. Its climates, reliefs, cultures and social types are very diverse. It is the language with its dialects that has allowed the social bond to be established.
In the Middle Ages, there were counties, duchies very powerful as states (Gascony, Limousin, Auvergne, Provence). These ancient provinces as their lands are rehabilitated nowadays for tourism, folklore or trade.

Already present in the Middle Ages, the violet is also cited by the poet Pierre Goudouli in the seventeenth century. But the favorite legend of Toulouse, wants a Piedmontese soldier has offered a purple Parma to his sweetheart, who lived in Saint-Jory. This is how the violet would have arrived in Toulouse. In 1908, the cooperative of producers of violet and onion is created. It will have up to 600 producers. Fifty years ago, violet was cultivated in the open field. His harvest was on the ground, his back bent. Over time and the cuttings, the plant gradually degenerated. In the 80s, a team of scientists decided to revive it on two aspects: first to move from a crop in the field to a pot culture, above ground and then regenerate the plant with in vitro plants. On a large scale, the test will be a failure. The violet has gradually lost notoriety in the face of many exotic plants, but slowly gets up to date with syrups, liqueurs, pastries and confectionery with an incomparable refined taste.