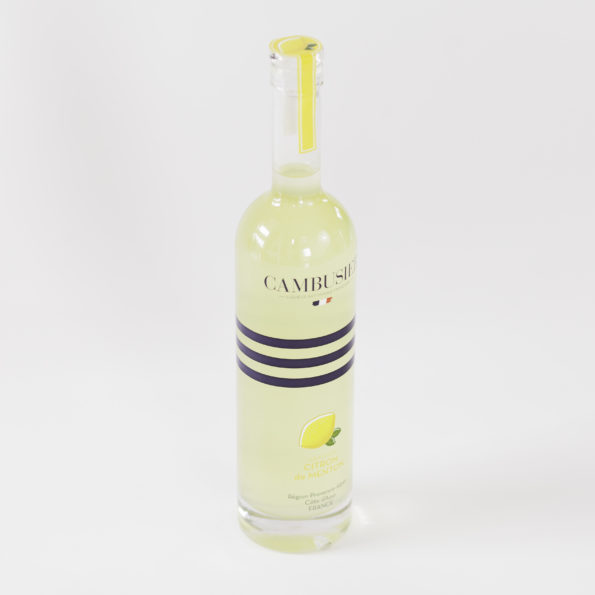 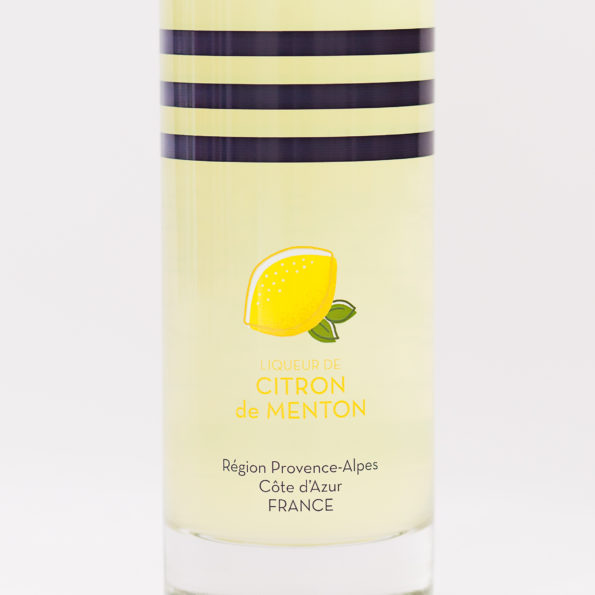 Cambusier’s lemon-tasting liqueur, quite close to its Italian cousin Limoncello, is made by macerating the peel of Menton lemons.
Intensely fruity, gourmand and refreshing, it wows with its incomparable taste.

This liqueur can be drunk pure, as a kir or in a cocktail and is served ice-cold.

Presented in its branded box
Volume: 50 cl / Alcohol 26%
Made in Menton (Alpes-Maritimes)

Since 2006, the family-run Menton Côté Citron has been creating with the region’s pride and joy, the Menton lemon, using the family’s exceptional savoir-faire and top-secret recipe to produce a delicious liqueur. They have their own production facilities, as well as a boutique in Old Menton’s pedestrian district, where they invite customers to discover their know-how and showcase their 100% Menton-made product. Down through the years, these craft producers have become acknowledged experts of this rare ingredient, grown by only a handful of aficionados.
In addition to its craft liqueur business, Menton Côté Citron also creates other delights such as its Menton Lemon Liqueur palet biscuits, Menton lemon sweets, meringues, essential oils, fragrances, etc.

More widely-known under its acronym PACA, this region is renowned for its sunny weather, its Mistral wind and its amazing geographical diversity. It borders Auvergne-Rhône-Alpes to the North and Occitanie to the West, with the Rhône River marking the regional boundary line.
PACA is one of France’s most dynamic regions and, as is only natural, ranks as the 5th richest region, thus generating a high rate of immigration (French and international). Spread over 31,000km², Provence-Alpes-Côte d’Azur totals some 5 million inhabitants. Its Mediterranean climate along the coast and its mountain climate inland offer it a somewhat delicate yet incredibly unique alchemy which make it a very special region in many ways. Highly aware of the potential of organic agriculture, this region developed rapidly in this field and currently boasts top position over all French regions.
Its closeness to Italy has strongly influenced its products which comprise a myriad of dishes using olive oil, aromatic herbs and summertime vegetables. It proposes a wide selection of specialities in addition to its Menton Lemon Liqueur including bouillabaisse, tapenade, Provence wines and Calissons from Aix.

This fruit, grown since the 15th century, had its heyday in the 18th century mainly through exports to Russia and the United States. Yet, the origins of Menton’s lemon are shrouded in mystery: according to the legend, Adam and Eve, cast out of Paradise, took the lemon with them until Eve came upon the perfect place to replant it.
Apart from this mythology, Menton’s lemon is, above all, recognized by its characteristics such as its vibrantly-bright yellow colour (result of its high acid and essence content) and its very strong taste. Following a period of decline, Menton’s production is currently making a comeback, in particular through the fifteen odd citrus fruit growers who continue to grow it throughout the region (100 tons per year). Its revival is highly-symbolic as it was recently awarded (2015) its IGP label (French Protected Geographical Indication).