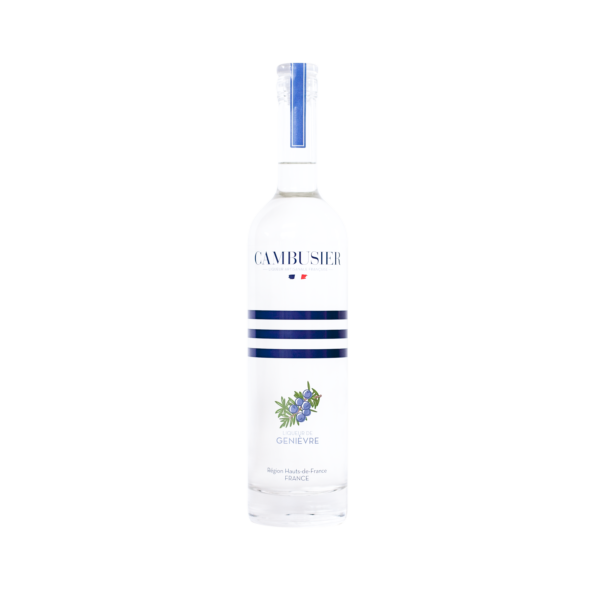 Cambusier’s juniper liqueur, is an excellent alternative to gin, results from the assembly of a maceration of génépi and a génépi alcoholate.
Traditional, natural and endowed with excellent digestive virtues, it surprises with its incomparable taste.

Presented in its branded box
Volume: 50 cl / Alcohol 40%
Made in Wambrechies (Nord)

The Claeyssens distillery of Wambrechies is one of the last two juniper berry distilleries (grape flavored with juniper berries) from France. Since its creation in 1817, it has been perpetuating the tradition and producing northern alcohol using a production process that has remained virtually unchanged for two centuries. In 1998, the Claeyssens Distillery was bought by the Depasse family, owner of the Grandes Distilleries de Charleroi. Anchored in tradition, Wambrechies Distillery innovates by offering new products: whiskey, beer flavored with juniper, cocktails, etc. In 1999, La Distillerie was entirely classified as a “Historic Monument” and then labeled “Qualité Tourisme”, in order to develop tourism activity.

The Hauts de France region is the new administrative region of Northern France resulting from the merger of Nord-Pas-de-Calais and Picardy. An agricultural land of excellence, the region is strong in agricultural performance, giving it a national leadership position in the agri-food sector. With its diversified agriculture, its unique training cycle in France or its time ahead of the development of agroresources, the Hauts-de-France region has established itself as the leading agricultural region in France.

Juniper berries are galbules produced by different species of juniper. It is not strictly speaking a bay, but an unusually fleshy and shaped galb, which has the effect of giving it the appearance of a bay. The gin has become the favorite drink of miners and textile workers, very numerous in the Nord-Pas-de-Calais region. Taken in the cafe, it is called “the bistouille” is the necessary boost to give himself the courage to go down to the mine. It is also a digestive highly appreciated by the bourgeoisie enriched by the Industrial Revolution. In 1935, the Claessens gin was rewarded at the Brussels International Exhibition. These fleshy berries are initially green, before adopting a color oscillating between blue, black and purple. They have medicinal properties (diuretic, antiseptic, tonic and digestive) used for a long time. In addition to flavoring game or sauerkraut, juniper berries are part of the composition of gin.